I can’t believe I’m sitting here at the tail end of March, a month that at its outset was full of carefully laid out plans, including many a blog post about what I’ve been working on. I’ve assembled them into one single blog post here; my apologies about its haste… 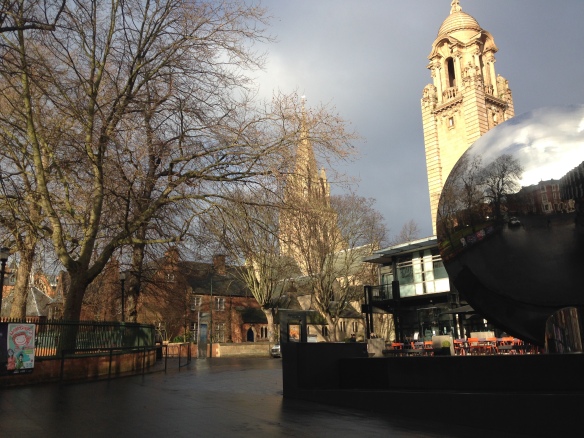 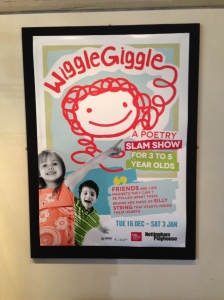 had its UK tour in Nottingham, The Egg Theatre in Bath, and finished at The MAC in Belfast this March as part of the Young At Art’s Belfast Children’s Festival 2015.

(if you’re wondering how on earth a poetry slam show for 3-5 year olds gets made, check my ‘Early years, cognitive schema and poetry slams‘ blog post)

2) The Lost Martini, with Accidental Theatre. 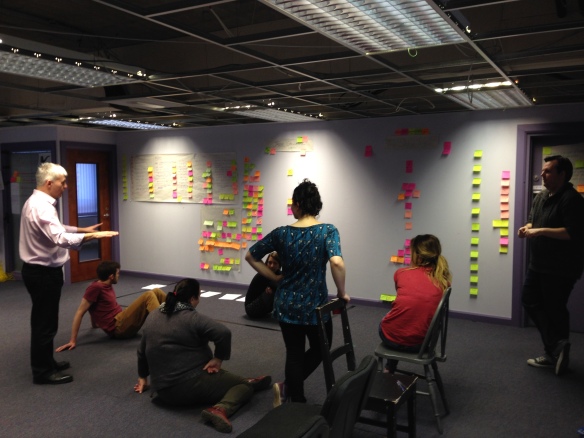 ‘The Lost Martini’ cast and director discuss story, structure, and character development via endless post-its that are moved (and moved back)

My official title was ‘writer/co-devisor’, but as the play was set in an underground jazz cafe in Belfast and immersed the audience in a whirlwind of the 5 characters’ stories at once, and they could hop between stories as they like, at times I felt writing the script was more like herding cats on multi-lane highway. The process was refreshingly democratic, with the cast creating text through improvisations and the creative team creating narrative shared within the 10 room set. There’s more about the process and creatives involved on “Post It Walls and Guitars” on the Accidental website.

3) I’m mid-way through an Arts Council NI-supported residency with music and dance company, Assault Events in Cardiff,  grappling with how oncurrent development of text, movement and music in devised work can be developed concurrently, rather than one or two of the disciplines leading the process with the others being tacked on. It’s been fascinating, challenging, thought-provoking and exciting, with a wonderful group of dancers to work with (courtesy of Arts Council Wales). 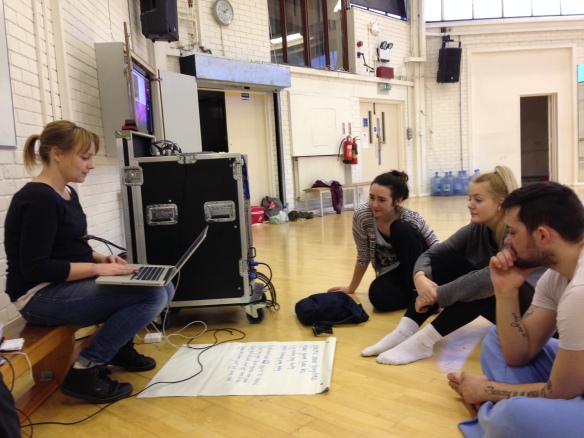 4) …and finally, I’m gearing up for the biggest project of my career to date, Reassembled, Slightly Askew. You may have read a thing or two about it on this blog already…

When I was in college, I loved poetry slams and their poets. The diversity of the performers and the topics they voiced contrasted what I has studied in the traditional English curriculum from my mainly white, suburban Boston high school. The way the poets, such as Sarah Jones, Stayceyann Chin, Saul Williams, Jessica Care Moore, Beau Si, and Taylor Mali made the language come alive and vibrant as they summon a ferocity greater than themselves.

Years later, I’m in Northern Ireland, writing a poetry slam show for 3-5 year olds. WIGGLEGIGGLE is the vision of Anna Newell of Replay Productions, co-produced by Nottingham Playhouse, with original music by David Goodall and choreography by Stevie Prickett. A ‘Dr Seuss meets hip-hop’ creation, WIGGLEGIGGLE aims to excite its audiences with its silly sounds, bouncing rhythms, fun free-styling, word-smithery, and tricky tongues. It’s been in development since Feb 2014, with periods of creative consultation with 3-5 year olds in the Belfast area. 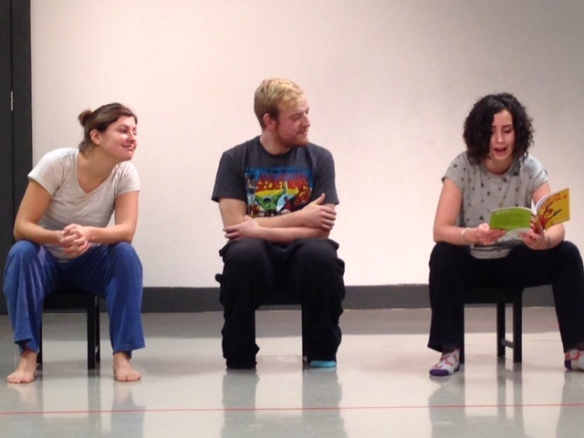 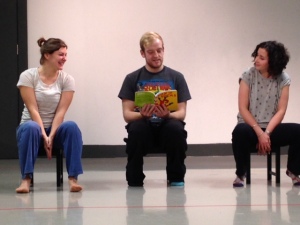 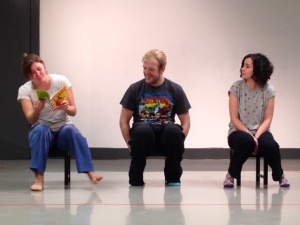 The process of creating WIGGLEGIGGLE has been incredibly intricate, where the artistic team has constructed a show based on patterns–the building blocks of  communication, movement, and language development.  Without being conscious of it, we are moving all the time to internal patterns and rhythms, such as our heartbeat. These cadences of the brain and nervous system appear to play an important role in everything from walking to thinking, as Jon Hamilton covers in the June 2014 NPR article, Your Brain’s Got Rhythm, And Syncs When You Think.

We’ve also integrated the cognitive processes of learning–termed as ‘schema’ by the well-known child developmental theorist, Jean Piaget– and how our brains build relationships between information we know and new information. These underpin the linguistic progression of the show, how the text moves from aspirated ‘Pppfff’ sounds to whole phrases and poems. 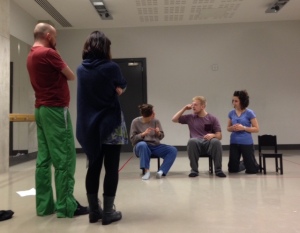 In creating WIGGLEGIGGLE, we also integrated traditional poetic conventions, such as alliteration (a fantastic example of which is Daniel Radcliffe, yes Harry Potter, on Jimmy Fallon doing Blackalicious’ ‘Alphabet Aerobics’:

And onomatopoeia–an excellent example is The Book With No Pictures by B.J. Novak:

WIGGLEGIGGLE is currently on tour in Nottingham, courtesy of Nottingham Playhouse, and will return for a run in Belfast as part of the Children’s Festival in Spring 2015. Already we’re hearing feedback that during the performances the children are engrossed, mesmerized, mimicking movement, and having a fantastic time!