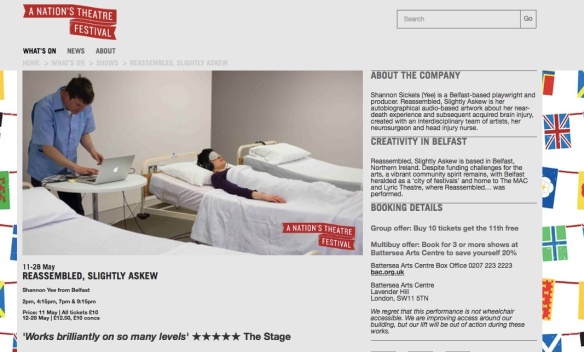 Thanks to Reassembled…‘s director Anna Newell (2016 Ellen Stewart International Award Finalist for Artists and Theatre Companies Doing Socially Engaged Work with Youth), Reassembled… has been invited to be part of Battersea Arts Centre’s ‘A Nation’s Theatre Festival’ this Spring, 11-28 May.

A Nation’s Theatre Festival is a two-month celebration of theatre from around the UK from April – May 2016.  There are over 60 shows and events in the festival, across 17 London venues, performed by more than 350 artists from outside London. Reassembled… is the only production from Northern Ireland that is participating.

“It is A CELEBRATION of the UK theatre ecology, shining a light on the breadth of innovative theatre and ideas produced by companies, artists and theatres from around the nation. It’s an opportunity for London audiences and theatres to experience, recognise and champion work from around the UK. It is A PROVOCATION to encourage conversations and debate:

Tickets are available at www.bac.org.

The development of Reassembled, Slightly Askew continues, with one more focus group held this month, in the same format as the one held in May:

Participants completed a baseline evaluation about their knowledge of neurology, acquired brain injury, psychoacoustics and binaural microphone technology, brain injury support services in Northern Ireland, and if the arts can be used as an effective approach in training for biomedical/health & social care professionals.

They were explained the terms of play, so to speak–if at any point during the audio experience, they wanted to stop listening, they could remove the headphones. They retained an element of control in the immersive experience in which they were lying down in hospital beds, eyes covered with eyemasks, ears covered by headphones. They were also told that while the two short audio samples from the current full draft was being played, they would be supervised, but not stared at.

After the two separate audio samples were played, the participants were gently woken one by one, and invited to return to the discussion table in their own time. There, they revisited their baseline evaluation, made additional comments, and a short group discussion was facilitated:

“The use of the sound technology was impeccable. I have never felt more in this situation before, especially the part where Shannon is being washed in the hospital. I truly believed that I could almost feel it myself! Amazing work!”

“I found this very powerful Shannon—it raised questions for me that I haven’t thought of— why do they have mirrors in lifts?? I was very struck by this I felt like the piece clearly conveyed the powerlessness.”

“I believe this is an excellent tool as it gives an understanding as to what feels like to have an acquired brain injury; the confusion the frustration etc, I felt at points I was experiencing the journey myself”

“Having also spent 3 weeks in the high dependency unit of a hospital in the past year, I found this quite traumatic. While your specific injury was brain-related, have you considered its impact on other types of illness”

“It is mesmerising, hypnotising”

“I do feel taken out of myself and vulnerable”

“Very personal piece of work. headphones transport us to her ‘world’/condition, could happen to any of us at any time, need to know more about these issues”

This feedback will be given to the artistic team and inform the next stages of revision as we move toward completion of the final draft before the end of Dec 14.

Reassembled, Slightly Askew, which I am testing out with selected focus groups in the next few months, is in the right place at the right time to tour NI beginning in 2015, then beyond, courtesy of support from The Wellcome Trust, Arts & Disability Award Ireland (administered by Arts & Disability Forum, Belfast) and The MAC (where I am fortunate to receive invaluable support from it’s HATCH supported artist scheme).