Part of my research into the life of Helen Waddell involved speaking with the knowledgeable Dr Jennifer FitzGerald, who launched her new book on Helen Waddell at Queens University Belfast.

Poet Sinead Morrissey of the Seamus Heaney Centre at Queens University Belfast School of English, also read, both of her own poems and Helen Waddell’s.

My research was made possible by an Arts Council NI Minority Ethnic Artist Support for the Individual Artist Award, which enabled me to have certain poems from Helen Waddell’s Lyrics from the Chinese translated into written and spoken Cantonese. Dr FitzGerald played one of these audio translations at the launch event.

Research used to inform the draft script of ‘Redeeming the Time’, courtesy of Louise Anson & family

During 2013, courtesy of an ACNI Minority Ethnic Artist Award, I was fortunate to get to know the life and writings of Helen Waddell, an inspiring, yet forgotten, female writer from NI who founded the genre of historical fiction through her famous novel, Peter Abelard (1933).

I was able to complete research from primary and secondary sources, including Helen’s own notebooks held at Queens University Belfast’s special collection, Helen’s personal letters to family and friends (courtesy of Helen’s great great niece, Louise Anson), and lengthy discussions with Dr Jennifer FitzGerald. From this, I drafted a short bilingual play, in Chinese and English, called Redeeming the Time. Initially, I had proposed to write a selection of short plays, but after reading the poetry and learning about Waddell’s life, a natural dramatic arc revealed itself and I decided to write a short play that had an emotional journey for the characters, with the poems acting as the connective tissue between scenes.

Themes that informed my script from Lyrics from the Chinese, Helen Waddell’s personal correspondence and life, and NI contemporary society include:

·   Binaries–how can you exist in the space between and bridge the two?
·   Sexism in politics
·   Transnationalism and cultural pluralism
·   Life of the mind vs. the cage of marriage
·   Love, loss, and betrayal
·   What happens when you are prevented from reaching your full potential
·   Being forgotten and also forgetting
·   How the mind offers escape from a bleak reality via fantasy and escape; getting lost in the minutia of life

A major barrier I have come up against to develop the play further is the lack of Chinese actors in Northern Ireland. The process of finding a Chinese translator to translate sections of the script and play into written and spoken Chinese highlighted the lack of infrastructure available in NI to work bilingually, whether it’s on a basic level of having translation at your appointment with your child’s playgroup, or on an artistic level of broadening the range of voices we hear onstage.

I would have gone to my lord in his need,

Have galloped there all the way,

But this is a matter concerns the State,

And I, being a woman, must stay.

I watched them leaving the palace yard,

In carriage and robe of state,

I would have gone by the hills and the fords;

I know they will come too late.

I may walk in the garden and gather

I had a plan would have saved the State.

–But mine are the thoughts of a girl.

The Elder Statemen sit on the mats,

And wrangle through half the day;

A hundred plans they have drafted and dropped,

And mine was the only way.

Research and translation of selected poems from Lyrics from the Chinese was made possible by a 2012 Minority Ethnic Artist Award from the Arts Council Northern Ireland.

Since I moved to Northern Ireland, I have been struggling with my ability to write a multilingual play; correction—I have struggling with whether I should even bother writing a multilingual play here because the odds of it getting developed and produced are incredibly slim, simply because Northern Ireland (and Ireland) lacks diversity in its pool of professional actors.

I was able to do this only once before in NI, funded through a local government initiative called Art of Regeneration, run by Antrim, Ballymena, Magherafelt Borough Councils in 2007. I wrote a short play called What’s In A Name? about a young Polish person named Alicia living in Northern Ireland and her process of negotiating a minority cultural identity, in particular, the significance of choosing an English name to call herself.

I have plenty of experience with that. I’m biracial myself, where ‘American’ is often mistaken as short-hand for ‘white’. I remember completing the demographic section of a standardized test in school when I was 8 and thinking to myself, “I’m not fluent in Chinese, so am I allowed tick the box that says I am Chinese?” I have grown up in relatively diverse environments where a dialogue about race and ethnicity exists. I have worked extensively with young people in New York City and observed their own struggles around being a minority.

The Polish actors in What’s In A Name? spoke both in Polish and English, and performances were followed up with a workshop led by the talented Charo Lanao-Madden about multiculturalism in Northern Ireland. The most popular feedback was that the young people enjoyed seeing Polish actors onstage, meeting them afterwards, and hearing Polish.

That was in 2007, and I haven’t felt it was feasible for me to write a play in a language other than English in Northern Ireland since. Until 2013.

I secured an Arts Council NI Minority Ethnic Artist Award to research the life and poetry of local author Helen Waddell and create a short bilingual play (Chinese/English) based on her collection Lyrics From the Chinese, Waddell’s own life and its cultural plurality, and prevailing issues in contemporary NI. Half of the cast of characters in Redeeming the Time are Chinese, and half are Northern Irish. However, the play cannot progress through the vital stages of script development and then performance without Chinese actors and further support. 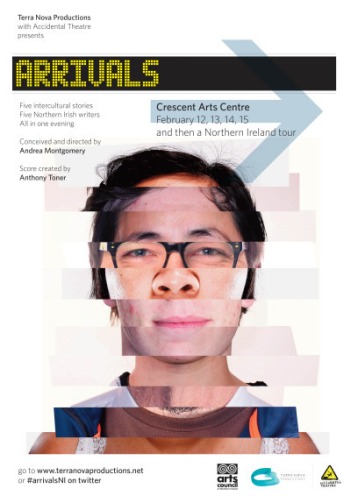 In 2013, I also received a commission to be one of 5 NI-based writers to participate in Terra Nova Productions’ evening of new writing, Arrivals, which opens tonight. Thanks to Terra Nova’s vision, I have been, at last, able to write for an ethnically diverse cast for a mainstage production that will tour around NI 12-22 Feb. As the actors are also multi-lingual (Punjabi, Romanian, Chinese, English), I have been able to include 4 different languages in my short play, titled Under Any Other Duties.

On the Soundcloud track below, writers Deirdre Cartmill, John Morrison & artist Nandi Jola chat about the project with BBC Arts Extra’s Marie-Louise Muir. The other writers on Arrivals are Jim Meredith, Paul McMahon, John Morrison and me.

Tremendous focus is placed on the act of listening to bridge cultural boundaries, particularly in NI. However, when it comes to cultural plurality, language is the essence of one’s ability to express oneself, to be heard and understood; from a playwriting point of view, without the actors to speak the languages, the conversation is one-sided.

I am coming to the end of the 12-month research and script development period for a bilingual script based on themes from contemporary NI and the life of Helen Waddell, and her collection of poems based on the ancient Lyrics from the Chinese, which was published 100 years ago this year. Lyrics… was monumental for Helen’s career, and brought recognition to a woman who was truly ahead of her time. Given that Helen’s translations of Lyrics… was her translation of an English translation of ancient Chinese poetry, I thought it fitting to have some of the poems that inspired my script translated back into Chinese. One of them is about sexism and politics, an issue which is still relevant :

The wise man’s wisdom is our strength,

The woman’s wisdom is our bane.

The men build up the city walls

For women to tear down again.

No man from any woman’s wit

Hath yet learned aught of any worth,

For wise is she, but unto ill,

To bring disorder on the earth.

What does she in affairs of State?

Her place is in the inner room.

Her wisdom doth least hurt in this,

To mind the silkworm and the loom.

Many thanks to the Arts Council NI for their support through the Minority Ethnic Artist Award scheme, to Lou and the Anson family for their generosity, and Dr. Jennifer Fitzgerald for her expertise.

Delighted to have received an Arts Council NI Minority Ethnic Artist Award to research local writer, translator & academic, Helen Waddell, and create short, modern, bilingual plays based on themes of her life and her book of poetry Lyrics from the Chinese which is celebrating its centennial next year.

In July, BBC Radio 4 presented an excellent piece about Waddell’s life and the importance of her work: Ulster’s Forgotten Darling.