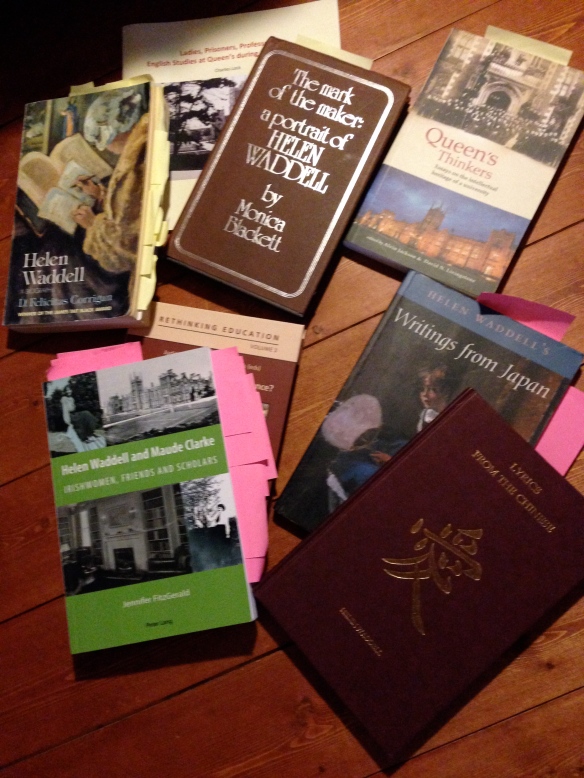 Research used to inform the draft script of ‘Redeeming the Time’, courtesy of Louise Anson & family

During 2013, courtesy of an ACNI Minority Ethnic Artist Award, I was fortunate to get to know the life and writings of Helen Waddell, an inspiring, yet forgotten, female writer from NI who founded the genre of historical fiction through her famous novel, Peter Abelard (1933).

I was able to complete research from primary and secondary sources, including Helen’s own notebooks held at Queens University Belfast’s special collection, Helen’s personal letters to family and friends (courtesy of Helen’s great great niece, Louise Anson), and lengthy discussions with Dr Jennifer FitzGerald. From this, I drafted a short bilingual play, in Chinese and English, called Redeeming the Time. Initially, I had proposed to write a selection of short plays, but after reading the poetry and learning about Waddell’s life, a natural dramatic arc revealed itself and I decided to write a short play that had an emotional journey for the characters, with the poems acting as the connective tissue between scenes.

Themes that informed my script from Lyrics from the Chinese, Helen Waddell’s personal correspondence and life, and NI contemporary society include:

·   Binaries–how can you exist in the space between and bridge the two?
·   Sexism in politics
·   Transnationalism and cultural pluralism
·   Life of the mind vs. the cage of marriage
·   Love, loss, and betrayal
·   What happens when you are prevented from reaching your full potential
·   Being forgotten and also forgetting
·   How the mind offers escape from a bleak reality via fantasy and escape; getting lost in the minutia of life

A major barrier I have come up against to develop the play further is the lack of Chinese actors in Northern Ireland. The process of finding a Chinese translator to translate sections of the script and play into written and spoken Chinese highlighted the lack of infrastructure available in NI to work bilingually, whether it’s on a basic level of having translation at your appointment with your child’s playgroup, or on an artistic level of broadening the range of voices we hear onstage.

2 thoughts on “Helen Waddell research for ‘Redeeming the Time’”